2017 Superannuation Reform - What this means for you - Spring Financial Group 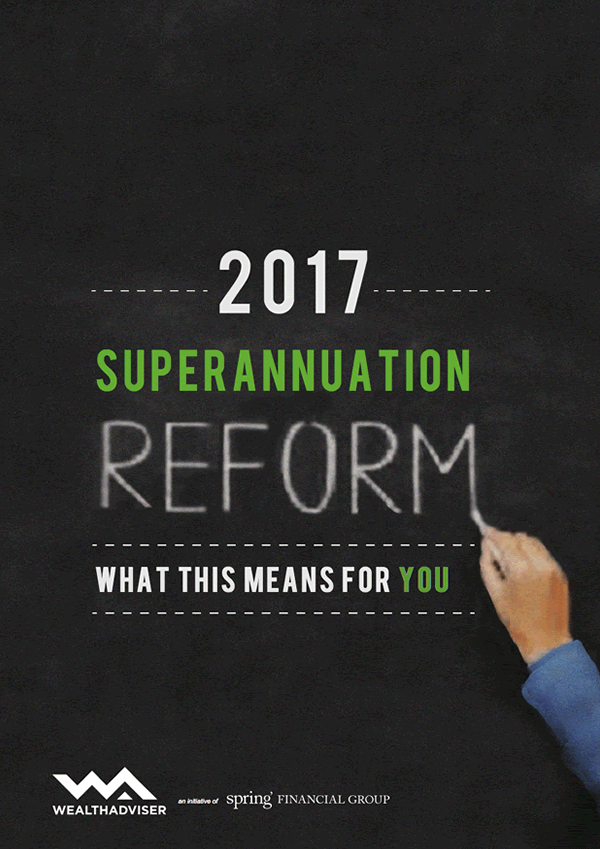 « Back to Education
« Our Services

2017 Superannuation Reform – What this means for you

The ‘˜Fair and Sustainable Superannuation’ package announced in the 2016/17 Budget contains the most significant superannuation changes since 2007. Many of these proposals became law on 29 November 2016.

This eBook covers what these changes could mean for you, with most changes becoming effective from 1 July 2017.

By the end of the book, this is what you will know:

Downloading this eBook will also give you access to special bonus offers within Spring Financial Group.

This eBook does not substitute professional tailored financial advice. If you wish to meet with an adviser please Make an Appointment.

Select a free eBook from our collection of financial education resources

Make an appointment Access free eBooks Ask us a question

A fresh approach to
financial services in Australia

At Spring Financial Group our philosophy is simple:  our entire business is centred on you and your goals. Financial planning is not about money, it’s about finding ways to help you achieve your goals through careful and thoughtful planning and execution. Of course money is generally central to that in today’s world; but it is not a goal in itself. It’s a means of reaching your goals whatever they might be.